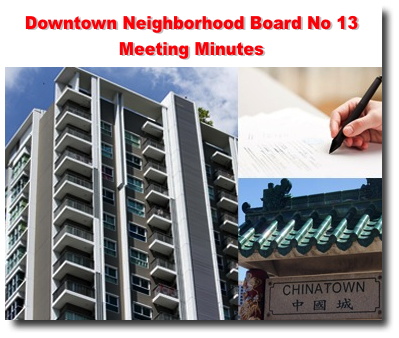 DOWNTOWN / CHINATOWN NEIGHBORHOOD BOARD NO. 13

CALL TO ORDER: Chair Ernest Caravalho called the Downtown-Chinatown Neighborhood Board No. 13 meeting to order at 6:00 p.m. Quorum was established with seven (7) members present. Note: This nine-member Board requires five (5) members to establish quorum and to take official Board action.

Lye MOVED and Shubert-Kwock SECONDED to take the agenda out of order by taking up agenda item II. B. before II. A. Hearing no objections, the motion PASSED by Unanimous Consent.

• Safety Tip: HPD encourages the community to double check that their vehicles are locked because most of the cases related to vehicle theft/UEMV are resulting from unlocked vehicles.

1. Blocking Fire Hydrant: Lye presented images of a City & County dumpster and wooden pallets blocking a fire hydrant near the intersection of Hotel and River Street.

2. No Smoking: Lye asked and Lieutenant Sagucio responded that smoking is prohibited at all City Bus Stops.

Presentation by HPD Chief Arthur J. Logan: Chief Logan came before the board, as requested, to introduce himself and to reassure the public of HPD's continued efforts to improve the Downtown-Chinatown neighborhood. Chief Logan discussed multiple policing efforts to combat crime, such as the broken window system, community policing, and hotspot policing. Chief Logan highlighted that HPD cannot solve all of the community's issues on their own, they need the community to work together through organizations, such as the Neighborhood Security Watch, and to voice their proposed solutions to our elected officials.

1. Homelessness: Fong raised concerns with daily issues related to homelessness that he faces as business owner. Chief Logan responded that Fong should contact the HPD District 1 Community Policing Team by calling (808) 723-3327 and request to be transferred to Sergeant Brandon Shiraishi. McDonald asked and Chief Logan responded that homelessness is a both a State and City issue that requires multiple departments and the legislature to work together to find solutions because HPD continues this catch-and-release cycle.

3. Gratitude: Shubert-Kwock commented on areas of improvement for HPD and expressed her gratitude towards the new administration.

4. Increasing Police Presence: Lye asked and Chief Logan responded that a number of positions were created for the Chinatown area to combat increased crime, but the main goal of this administration is to fill at least half of the 356 vacancies in order to have more officers patrolling the community. Chief Logan clarified that the issue HPD currently faces is staffing shortages, not a lack of funding.

5. Recruitment: Armstrong asked and Chief Logan responded that the HPD Recruiting Team is hard at work, and the recruitment numbers are still low but Chief Logan is confident that they will only go up from here.

8. HPD Foot Patrols: Chair Caravalho requested that the new administration re-instate the HPD Foot Patrol service because that had the most significant and immediate impact towards the goal of cleaning up Chinatown. Chief Logan responded that he needs to fill the vacancies first before he can re-instate that additional service. Lieutenant Roberts responded that the replacement cameras for District 1 are expected to arrive in January 2023.

Keiki Market Swap Meet Fair: Sydney-Hanilei Spencer-Cullen announced that a Keiki Market Swap Meeting Fair will be held on November 11-12, 2022 from 9:00 a.m. to 12:00 p.m. at the Ke'elikolani Middle School Lawn. The event is brought to you by: For Kids, By Kids, About Kids. The purpose of the event is for children to gain business experience and to provide an opportunity for young entrepreneurs to sell their products/services. Sydney is looking for keiki vendors to participate in the event. To register for the event, visit: www.forkidsbykidsaboutkids.com.

Request for Security Guards: Gerry Ebersback announced that, due to new management, the building that her business operates out of will no longer be employing security guards. Ebersback requested that the board organize a volunteer security program to protect the small businesses of Chinatown on a daily basis.

Partnerships to Address Common Issues: Lye announced that he attended a recent Waikiki Neighborhood Board No. 9 meeting and was pleased to learn that the board is interested to work with this board, if necessary, to enhance the responses to common community issues to our elected officials.

Assault on Security Guard: Lye announced that a security guard was assaulted on HPP property by three (3) men, nearby the Hallowbaloo event on Saturday, October 29, 2022.

Mayor Rick Blangiardi's Representative: Deputy Director Ian Santee (Honolulu Emergency Services Department) provided the report on the Mayor's monthly newsletter, which can be found at: https://www.oneoahu.org/newsletter. Santee also reported follow up responses to questions raised at the last meeting and was available to take questions.

1. Housing First Vouchers: Stack asked and Deputy Director Santee responded that he will follow up on how many Housing First vouchers have been given out for the Chinatown area for the city's affordable housing in Chinatown over the past five (5) years.

2. Community Garden at Kamali'i Mini Park: McCarney requested that the initial request for information be revisited, in regards to the process for converting a City park into a community garden. Chair Caravalho commented that HFD informed him that they no longer have jurisdiction over the park.

1. Kickback Scheme: McDonald asked for Senator Rhoads's thoughts on an article published by the Hawaii Free Press on Thursday, October 6, 2022, which states that the federal court determined in 2001 that Senator Rhoads participated in a Honolulu City Council kickback scheme in the late 1990's.

2. Emotional Support Animals: Lye requested that if Senator Rhoads's is re-elected that he take a critical look at the regulations regarding emotional support animals to find ways to develop commonsense and valid ways to confirm such animals, as Lye believes the current system is being abused. McCarney raised additional concerns regarding the lack of information and enforcement on the issue.

Board of Water Supply (BWS): Steven Norstrom provided the report, which can be found at: https://drive.google.com/drive/folders/1F4DdI9R8Er12TNf6Bl-yb4p4EW0-68vu. There was a 6-inch water main break at 1902 Queen Emma Street on Saturday, October 1, 2022. Norstrom announced that BWS is currently hiring and those interested may find more information at: https://www.boardofwatersupply.com/

Questions, comments, and concerns followed. Increase in Rates: Lye asked and Norstrom responded that BWS schedules their rate increases for every three (3) to four (4) years, and that 2023 is when BWS may begin working on rate increases.

Safe Haven: Greg Payton [gpayton@mhkhawaii.org] provided the report, which can be found at: https://drive.google.com/drive/folders/1F4DdI9R8Er12TNf6Bl-yb4p4EW0-68vu. Payton highlighted that a total of 57 homeless adults with mental illness have been placed into permanent supportive housing facilities from January-October 2022, and Mental Health Kokua (MHK) currently has 42 low-income tenants in the Pauahi Hale building.

Chinatown Business Community Association (CBCA): Chu Lan Shubert-Kwock provided the report, which can be found at: https://drive.google.com/drive/folders/1F4DdI9R8Er12TNf6Bl-yb4p4EW0-68vu. The next CBCA will be held at Yong's Kitchen on Tuesday, November 8, 2022 at 10:30 a.m., as Golden Palace has permanently closed after servicing the community for over 20 years.

Chinatown Improvement District (CID): Lee Stack reported that the CID is a 501c(3) non-profit organization operating in the greater Chinatown area to improve the community. Stack responded to a question raised earlier, by commenting that the CID organized security patrols among businesses who cooperated to have controls over the entire Chinatown area. Stack highlighted the successful Mid-Autumn Moon Festival that was held on Saturday, September 10, 2022.

1. Public Funding: McDonald asked and Stack responded that the CID has received small public funding in the past, such as a Tourism and Lodging Grant that helped with CID's Security Patrol program about four (4) years ago.

2. Mid-Autumn Moon Festival: Shubert-Kwock commented that there was a lot of community spirit regarding the distribution of 100 lanterns to various businesses in the community.

Neighborhood Citizen Patrol: Kevin Lye presented images and reported observations by the patrol during the prior month, including Lye inviting the public to walk with the patrol on the second Tuesday of every month, departing at 7:00 p.m. from the Diamond Head Tower lobby of Kukui Plaza. Please bring a friend, join the patrol, and help identify areas of concern within the community.

Honolulu Authority for Rapid Transportation (HART): Harry Cho was present to take any questions and deferred his time to Patrick Watson (Public Information Manager at Honua Consulting Company - HCC). Watson is representing Frank V. Coluccio Construction Company (FVCCC) on the work that they are about to commence on the City's Center Utilities Relocation (CCUR) Phase III contract. Watson reported traffic updates, which can be found at: https://drive.google.com/drive/folders/1F4DdI9R8Er12TNf6Bl-yb4p4EW0-68vu. Watson invited the public to join HCC's next monthly CCUR Phase III Business and Community Meeting on Wednesday, November 9, 2022, at 6:00 p.m. via Zoom. You can register at: https://bit.ly/HARTPhase3. Sign up for the CCUR III eBlast: http://eepurl.com/h1g2W5. You can also email ccur3@honuaconsulting.com for more information.

1. Hammerhead Cracks: Lye asked for reassurance that the concrete pillars being constructed in this phase of the project will not face the same problems that earlier sections of the rail track have faced regarding hammerhead cracks. Cho responded that HART has taken those lesson learned into consideration to avoid the same mistakes moving forward.

2. Security Personnel on Rail Trains: Lye commented that he recently rode the public rail in Chicago and noticed that without any personnel on the train that riders were smoking pot and exercising other illegal activities, and asked if our rail trains will have some type of security personnel patrolling the trains. Cho responded that there will be three (3) levels of security: (1) Station/Train Attendants, (2) Allied Universal Security Services (contracted by DTS) patrolling all of the rail facilities, and (3) law enforcement agencies (City/State/Federal). Cho added that thousands of security cameras will be installed once the system is complete.

3. Flange-Bearing Frogs: McDonald asked who is responsible for the decision to use flange-bearing frogs versus standard tread-bearing frogs, have they been held accountable, and if they are still employed by HART.

Election of Officers - Secretary: Hearing no nominations, this item was deferred to the next meeting.

Approval of Regular Meeting Minutes - Thursday, October 11, 2022: McDonald MOVED and McCarney SECONDED to approve the minutes as amended by Lye. Hearing no objections, the motion PASSED by Unanimous Consent.

Treasurer's Report: Neighborhood Assistant Buck announced that NCO is revising the concept of a treasurer's report by aiming to provide the boards with sufficient funding for community outreach services.

Conference of Chairs Report: Chair Caravalho reported the following announcements made at the last Conference of Chairs that was held on Saturday, October 15, 2022. The NCO will continue to fund the required printing and postage costs associated with the agenda/minutes mail-outs for every neighborhood board, as required by Sunshine Law. If any participant(s) of these meetings does not act appropriately, the Chair has the authority to expel the participant(s) from the meeting. Regarding meeting minutes, the NCO will continue to provide a draft of each regular meeting minutes and if the board approves any amendments to that draft it will be the responsibility of the person(s) making such amendments to submit the final version to the Chair and to the Neighborhood Assistant to be filed with the NCO. The NCO will provide each neighborhood board with up to $1,000 for community outreach services. Chair Caravalho encouraged the board to come prepared to the next meeting with ideas of how to spend the community outreach funds.

Next Regular Meeting: The next Downtown - Chinatown Neighborhood Board meeting is scheduled for 6:00 p.m. on Thursday, December 1, 2022.

Archive: Find an archive of handouts and referenced materials apropos to Downtown-Chinatown Neighborhood Board 13 at: https://drive.google.com/drive/folders/1F4DdI9R8Er12TNf6Bl-yb4p4EW0-68vu

ADJOURNMENT: The meeting was adjourned at 8:29 p.m.