PRESS RELEASE:
We're 12 years old, and we're celebrating with our annual Grand Slam FINALS show!! After an exciting season of qualifier rounds at First Thursdays, HawaiiSlam is ready to select the twelfth team to represent Hawai`i at the National Poetry Slam (NPS), which will be held in Oakland, CA this year. The 12 best poets from the 2014-2015 HawaiiSlam season will battle it out in a three round elimination competition to determine the 4-member team that will fly up to the NPS. The poets will undoubtedly bring their best pieces to the stage in what will be the greatest slam poetry show of the year!! The proceeds from this annual show/fundraiser will fund the HawaiiSlam Team's trip up to the NPS.

As always, the night will be hosted by Kealoha, and will also feature a guest DJ and live painting throughout the evening. The Grand Slam FINALS show will be held at Fresh Cafe. First Thursdays is the largest registered poetry slam in the world (attendance of 500+). The Grand Slam FINALS event is on Thursday, April 2nd. Doors open at 7:30pm, and the show starts at 8:30pm. Tickets are $15, and are available online at www.HawaiiSlam.com and at various retail stores (listed on the website) including Fresh Cafe, Jelly's, and UH. For more info, check out the website at www.HawaiiSlam.com, send an email to info@HawaiiSlam.com, or call 387-9664.

About NPS: The National Poetry Slam (NPS), which is often dubbed as the superbowl of slam poetry, is an annual competition that will draw in over 70 poetry teams from around the world. The lineup of competitors at the NPS is loaded with professional touring poets and poets from HBO's Def Poetry Jam. For more information, check out www.poetryslam.com

The Best Slam Poetry Show of the Year is Here!!!Ę HawaiiSlam's 12th Anniversary Grand Slam FINALS is coming up on April 2nd at Fresh Café Kaka`ako.Ę Get ready to witness the 12 best poets from the 2014-2015 season performing their strongest pieces in an all out, three-round elimination match to determine the members of the 2015 HawaiiSlam team. Ę

Do not miss out on this show!!Ę You can get tickets for the Grand Slam FINALS at the following locations:

INTERNET
- Internet purchase at www.HawaiiSlam.com or click here on this paypal link

Tickets are $15.Ę Those who buy tickets ahead of time will be given priority in the line.Ę All those who buy at the door will come in after everyone else who already has tickets, so get yours now!!Ę Proceeds from this annual show/fundraiser will fund the HawaiiSlam Team's trip up to the National Poetry Slam in Oakland, CA. 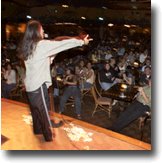