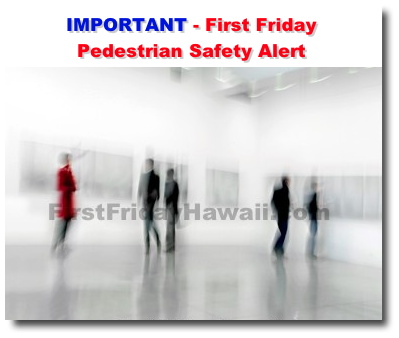 First Friday -- perhaps Honolulu's first and most successful "pop-up" event! Since 2002, the first Friday of the month has simply been a date on the calendar when people know to head to the Downtown-Chinatown area to enjoy art, entertainment, surprise performances, an occasional protest, and crowd watching and to visit restaurants, bars, galleries, and shops. First Friday (along with Second Saturdays and other calendar-associated events) occur throughout the U.S., each with a different format, approach, and draw, shaped around the interests and characteristics of their respective communities. These type of events are often part of an area's urban economic development strategy to increase business and attention to turn-around areas.

Unlike events like Honolulu Night Market or Hallowballoo, First Friday is not a hosted or organized street festival or fair; the action takes place at the discretion of and within the premise of each participating venue. Considered a legacy event, First Friday garners valuable local, national, and international media attention as one of Honolulu's "must-dos". It is also an important night for area businesses who experience a boost in sales and exposure. Additionally, First Friday has been an essential part of Downtown-Chinatown's revitalization, ridding the area of its negative reputation, bringing needed support to increase safety and clean-up efforts, and encouraging locally-owned businesses to open their doors.

In Honolulu, over a period of 12 years -- or about 140 First Fridays -- the event grew in popularity, peaking in 2009-2010. Despite drawing larger-than-usual crowds to the area in a single night, the event is considered safe, with no reports of chronic crime or safety issues.

The recent loss of art galleries and key businesses, like Indigo, combined with interest in communities including Kaimuki, Kailua, and Kakaako, attendance has steadily decreased. Businesses report a noticeable loss of early evening activity, numbers of customers, and a 25-30% drop in sales.

In 2008-2009, when First Friday was attracting large numbers of attendees, area merchants, Department of Transportation Services (DTS), and the Honolulu Police Department (HPD) all became concerned. Overcrowded sidewalks and intersections were uncomfortable and there was potential to put pedestrians, buses, and emergency vehicles in danger. After some planning and collaborating, the Arts District Merchants Association (ADMA) volunteered to help manage the safety issue, with the support of HPD, OTS and DTS. A plan was put into place to create a vehicle- free pedestrian corridor. To pay for the closure, each month ADMA, a nonprofit serving area merchants, collected donations, ranging from $50 to $200 per month, from the area's small businesses to pay for off-duty police officers and street closure permit and barriers. The positive effects were immediately felt.

Recently ADMA was put on notice that HPD would require an 80% increase in off-duty coverage -- from 10 officers costing $2,700 to 18 officers costing $4,700 (per month). Several meetings with City officials to develop viable alternatives to this request have failed. With decreased merchant sales, monthly donations were declining, often not covering the original $2,700 cost, and ADMA has had to face the reality that it cannot meet the required 80% increase. Therefore, ADMA will no longer coordinate or pay for the First Friday Hotel Street closure.

Starting this next First Friday, January 2, 2015, Hotel Street will remain open to buses, bikes and emergency vehicles all day/night. Pedestrians need to avoid walking across or in the street.

ADMA is urging the public to exercise caution and patience. Sidewalks will be more crowded than usual. Pedestrians should not bypass sidewalks by stepping into the street and must cross only in marked (cross walk) areas. Additionally, pedestrian crossing signals (walk, don't walk) at intersections must be followed. Many pedestrians do not understand what the flashing, red hand signal means. If you are in the cross walk and the hand starts flashing, you have time left to finish rossing. If you are not yet in the cross walk and the hands starts flashing this is not an invitation to start; doing so may result in a jaywalking ticket. Jaywalking tickets come with a $130 fine. (With this change in traffic patterns starting this month, it's anticipated that HPD will be patrolling the area to help ensure pedestrian and vehicular safety.)

As it has since 2002, First Friday will continue monthly, with merchants offering entertainment, specials, and surprises; visitors are encouraged to attend and while at the same time are strongly urged to be aware of the change in traffic patterns, to follow the law, and exercise caution.