The Hawai'i State Art Museum presents Ho'oulu: The Inspiration of Hula, an exhibit of hula-inspired and hula-related relocatable and commissioned works from the Art in Public Places (APP) Collection. 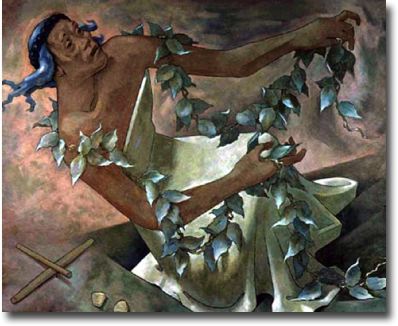 Ho'oulu: to grow; inspired as for artistic creation; to enter in and inspire. The term describes the proliferation of hula, beginning with the hula deities to the numerous kumu hula and h lau hula (hula schools) throughout the world.

It explains how hula, as the muse, has moved artists to produce the works in the APP Collection. Ho'oulu expresses an objective of the advisory committee and exhibit team: to motivate HiSAM visitors to learn more about hula and Hawaiian culture.

The exhibit is designed to mimic the ' hi'a lehua tree, a tree beloved by and associated with the hula deities. Hi'iakaikapoliopele planted a grove of red and white lehua for her friend, H poe, who taught the goddess the hula.

Hula goddess, Kapo'ulak na'u, loved the lehua of K 'ana, Moloka'i. Offerings of ' hi'a lehua flowers are placed on the altar to Laka, a patroness of hula. The flowers represent K ka' hi'alaka, the male deity of hula, also known as Laka. His symbol is the legendary tree, ' hi'a Laka, that bears one red lehua blossom on the eastern branch and one white lehua blossom on the western branch. 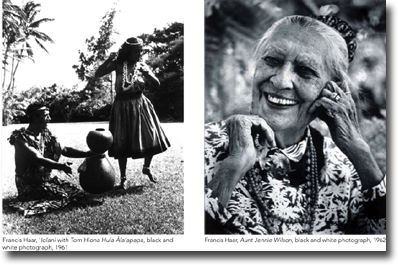 Beginning with the roots, Hi'iakaikapoliopele's epic tale, one of the origin stories of hula, is illustrated in a variety of media. Two such works from the APP Collection are a series of seven black and white photographs by Bill Woods. The series is based on the encounter of Hi'iaka and her relative M lei at Makapu'u, O'ahu.

The other is a commissioned work of art by Kazu Kauinana. "Ka Mo'o 'Ili'ili" references Hi'iaka slaying the mo'o (dragon) of M noa Valley. Kauinana's sculpture rests on the mo'o's remains at K hi Elementary School. A few of Enos' illustrations from Ka Mo'olelo o Hi'iakaikapoliopele and The Epic Tale of Hi'iakaikapoliopele are featured here.

The trunk or kumu features the portraits of renowned kumu hula who have received the Order of Distinction for Cultural Leadership from the State of Hawai'i: 'Iolani Luahine, Rosalie Lokalia Montgomery, Mary Kawena Pukui, and Edith Kanaka'ole.

The branches contain the portraits of loea hula (hula resources) by photographer Shuzo Uemoto, with additional photographs by George Bacon and Chris McLuckie. The portraits were featured in Volume 1 of N n I N Loea Hula: Look to the Hula Resources, published in 1984 by Kalihi-P lama Culture and Arts Society, Inc. 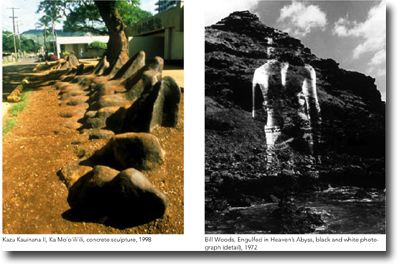 The fruits and flowers of the ' hi'a are represented by dances and dancers. Photographer Francis Haar documented kumu hula (hula master) 'Iolani Luahine with kumu hula Tom Hiona performing different hula in the late 1960s and early 1970s. A selection will be featured, as well as Haar's portrait of Aunt Jennie Wilson, a dancer at King David Kal kaua's court.

To complement the still images, the 1976 HSFCA-sponsored film by Tip Davis of Aunty 'Io with her niece Hoakalei Kamau'u, entitled Hawaiian Dancer, will be shown.

The Hula Preservation Society, in partnership with the HSFCA, is producing a video containing interviews that they have conducted with some of the kumu hula in the branches section. The video will premiere in the gallery.

Hula costumes of kapa (barkcloth) by Moana Eisele and Ka'iulani de Silva will be on display. A brief history of the HSFCA's involvement with hula will also be presented.