Weldon Kekauoha officially emerged onto the Hawaii music scene in 1999 with the release of his first solo-recording project, "Hawaiian Man". His debut album later received three Na Hoku Hanohano Award nominations and won for "Most Promising Artist" in 2000, an award reserved for first time recording artists only.

The following year Kekauoha became a member of the Manao Company. Returning from a 10 year hiatus in 2001, the reorganized group released a new project entitled "Spread A Little Aloha". In 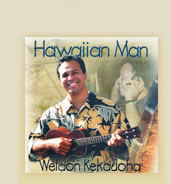 2002, the group's immense talent and popularity earned six Hoku nominations sweeping the event by winning five awards that included "Song of the Year", "Contemporary Album of the Year" and "Group of the Year". 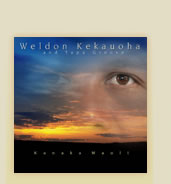 Born to parents Ailene Mililani Chun and Edward Kekauoha, Weldon was raised in the area of Kaimuki on the slopes just behind Diamond Head.

Like many Hawaiian families, music is always a part of daily life. Notable musicians from both sides of his family such as Kawai Cockett and "Little" Joe Kekauoha helped to influence his love for music. Kekauoha's father & mother, and grand-mother, Kahaeholookalani Aea, nurtured Weldon's passion for music.

As a young boy Weldon sang with the Honolulu Boy Choir and had the opportunity to extensively tour the continental US, Canada and Mexico. Former members include Jeff Rasmussen, Sean Naauoa and Bobby Moderow Jr.

In 1985, during his high school senior year, Weldon competed in the island-wide talent contest "Brownbags to Stardom". The group took first place and received the privilege to record their winning song on a 45. The group's name was "Na Kane Pono" who would later go on to become
known as "The Manao Company".

Now, Kekauoha finds himself at the helm of a different canoe as producer, composer and businessman. Presenting his music as a seasoned artist Kekauoha continues to perform through out Hawaii, Japan and the continental US. He continues to live in Honolulu with his wife Rona and daughters Melia, Moeaikamaamaama & Hailiopua.