Click here to fill out the form below to get more info/offer.
Using multi-media techniques, Ivan's original paintings convey themes reflecting unique inner/outer space-age visions; his art contains a personal touch and style that can convey humor as well as mysticism. 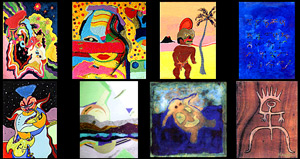 About Ivan Krillzarin
Ivan Krillzarin was born May 31, 1941 in Central Pennsylvania, USA. Coming from an artistic and musical family, he got his first set of drums (Slingerland) at age 5. By 13 he was playing drums for a Russian/Ukrainian folk band at various church functions in South Philadelphia. His love of color and rhythm was channeled into music and painting from an early age.

In the 50's Ivan's family moved to the suburbs of Philadelphia where Ivan went to school and grew up being strongly influenced by new phenomena like UFO's, Rock & Roll, TV, Neon and 3D Science Fiction movies. These influences soon came to be reflected in his paintings. He studied drums, composition and arranging at Berklee and Julliard Schools of Music and studied drumset with Dave Levin, Sam Ulano, Paul Patterson and Alan Dawson.

After serving with the 730th U.S. Air Force Band in the early 60's, Ivan remained active as both a painter and a musician, attending Fleisher Art Academy in Philadelphia between international music tours with such diverse artists as Bill Haley and the Comets, Gary U.S. Bonds, Don Cherry, John Tchicai, Sabu Martinez and Olatunji, among others. His first art exhibition was at a Philadelphia Gallery/Coffee House called "The Second Autumn" in 1963.

In 1967, Ivan moved to Europe where he attended courses at the Copenhagen Art Academy and was actively involved with the dynamic Psychedelic Art and Music Movement of the times.

Based in Europe for fourteen years, he exhibited his paintings in Denmark, Sweden, Holland, India, Morocco, England and Brazil as well as recording and playing drums in avant-garde jazz festivals around the world.